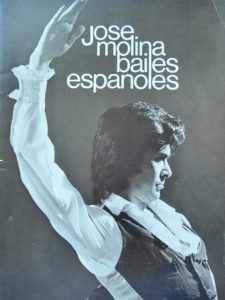 I met Jose in 1959 when we were both in Jose Greco’s Company.  Jose was a soloist in the company at the time and his forte was primarily Escuela Bolera. His numerous entrechats, superb castanets, beautiful smile and personality, aside from his talent, won every audience.  Some business men in Washington D.C., attending one of Greco’s SupperClub performances at the Shoreham Hotel, presented Jose with a proposal to form a company of his own. Jose asked me to join him as First Dancer/Choreographer in this venture  and since he had no managerial experience at all, one of Greco’s managers was also asked to join the venture.  A corporation was financed and formed by these gentlemen, which became Quijada Corporation. This was a wonderful opportunity for us and, between the three of us, we were given 49% of the Corporation and  created “Jose Molina Bailes Espanoles” in 1962. Ultimately, the Washington men dropped out and the company was handed over to Arthur Shafman, who continued to sponser the company for many more years.

The first company was made up of six dancers, including Jose, a guitarist, a pianist and the manager.  We traveled to our concerts in an airport limousine.  The Washington backers attended our first Supper Club appearance at the Caribe Hilton Hotel in San Juan, Puerto Rico and recognizing further possibilities for the company, put a halt to our performances and sent Jose and me to Spain to recruit more dancers, a singer, have additional costumes made and expand our concert program, which consisted of Escula Bolera, Spanish Regional Dances, Stylized Spanish and Flamenco.  We had a well rounded out program, not only flamenco, but dance styles from all of Spain. That was the acheivement of Jose Molina and the company and contributed to its success. We toured throughout the U.S…… from Carnegie Hall to Missoula, Montana, Toronto to Hawaii, Aruba, San Juan, St. Thomas, St. Croix and the Bahamas. We performed with Symphony orchestras, opened the San Francisco Hilton Hotel, performed on major TV shows and at The United Nations. Jose Molina Bailes Espanoles did help keep Spanish Dance on major stages.

During the early years, I did most of the Choreography without program credit promoting Jose’s name while he was developing his flamenco abilities. He was truly dedicated to this and on breaks in our tours, he would return to Spain to study and improve his flamenco, primarily with Tomas de Madrid, whose style he adopted and improved upon. I would say that his major acheivement was developing his flamenco ability, having gone from an extremely Classical start to becoming a tour de force in flamenco. Aside from many other dancers from the company who went on to further their dancing careers, he also engaged Antonia Martinez, a beautiful, talented dancer as his prima balerina. The fire and sparks they created on stage, her experience and exposure with him led to a later career as a teacher/instructor for the Conservatory Royal School in Madrid. My experience of creating choreography for the company for so many years, has led me to enjoying my life now as a choreographer, not only of Spanish but of Classical Ballet as well.

I remained with Jose for 17 years and we’ve remained friends for life. There are so many loving anecdotes of Jose. Two of my favorites are when a gentleman at an airport asked him for the time and Jose gave him a dime.  The other was when he asked a hotel desk clerk if he could cash his check and the fellow said “yes, how big is it” and Jose drew the outline of the check with his fingers on his desk.